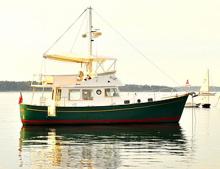 Peter P asked about Willard’s Military Production. In 2002 I began redrafting my paper on Willard’s History and Production. Here is an excerpt:

After the mid-1970’s Willard primarily built military and commercial craft, including a 120 foot survey vessel since converted to a yacht. It also was a custom builder of larger motor yachts. In 2002, Patrick Gerety described Willard Marine as “one of the most prolific builders in the US, building more boats for the military than anyone in the U.S.” He said that during the forty years 1961-2001 Willard had built “several thousand” boats. Of those, about 235 were pleasure craft.

According to PassageMaker Magazine Willard’s line in 2002 included “rigid hull inflatable boats to 36 feet” capable of mounting heavy machine guns. “The largest, a military patrol boat, is powered by turbocharged inboard diesels, can haul 18,000 pounds and is capable of 35 knots.” “It also was building general purpose and personnel boats for the military, harbor cruise boats for commercial operators, fireboats, oil skimmers and pilot boats for harbor authorities.” A semi-submersible excursion boat for underwater viewing was one of its more exotic productions.

After the September 11, 2001 terrorist attacks the US Navy asked Willard Marine to design and build a new aluminum patrol boat. The prototype was completed in November 2001. In December 2001 a B-1 bomber crashed in the sea off Diego Garcia on its way to Afghanistan. Two Willard Marine RIBs (rigid hull inflatable boats) were used to recover the crew. When the Navy’s USS Cole was re-launched after repair from its attack in 2001, it carried a compliment of .
As of 2002, Willard planned to continue building primarily in fiberglass reinforced plastic, but expected to build more military boats in aluminum. It was thought that some of that might find future application in the pleasure-boat line, but shortly thereafter Willard completely ended its limited recreational production. For the moment, its focus was to be 100% military.

Historically, I do not know what the commercial/military mix may have been.